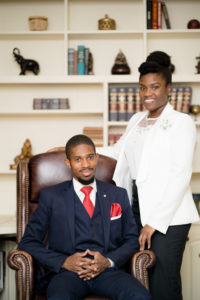 Pastor Shelot Pierre is the Co-Founder and Senior Pastor of Shekinah Haitian SDA in Fort Worth, Texas. He believes in preaching and teaching the Word of God, and just as importantly, he believes that we must “live” the word.

Pastor Shelot began his studies at Southwestern Adventist University in Keene, TX in International Political Sciences. He soon realized and felt the divine call to become Pastor. After receiving divine confirmation, he changed his major to study Theology. In 2012, he graduated with a Bachelor in Theology and a minor in Biblical Languages. Shortly after, in 2013, he pursued his Master of Divinity at Andrews University Adventist Theological Seminary in Berrien Springs, MI. At this period, he met his soon-to-be wife Laurie Pierre. In May 2016, Pastor Shelot Pierre and Laurie graduated together and became husband and wife the following week. Pastor Shelot Pierre is a young dynamic preacher of the Gospel and passionate to win souls for the Kingdom of God.

Any cookies that may not be particularly necessary for the website to function and is used specifically to collect user personal data via analytics, ads, other embedded contents are termed as non-necessary cookies. It is mandatory to procure user consent prior to running these cookies on your website.